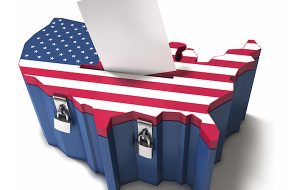 I was a registered Democrat for most of my life – but recently because of the change in the politics of the party to become more radical – I have chosen the middle path.

Though our site usually refrains from politics – because of many factors – we do not shy away from treating issues that are pertinent to Torah, Judaism and Jewish people. We thus give you logical and reasons according to Torah for who we think will win the Election according to Torah.

On the Dollar it says “In G-d We Trust.” This is one reason why the US Dollar has been a major & strong currency in history. In Many of Trump’s speeches he mentions G-d. G-d gives success to those that believe in Him.

G-d wants the world to follow morality of the Torah – The 7 Noahide laws for all nations and the 613 Commandments for the Jews. Trump’s platform and stance is more in line with Torah than his opponent.

God Loves those that are loved. Trump has more people who show up at his rallies than his opponent – an indication of his popularity.

4. Trump Has Done a Good Job Bringing Up the Economy & Holding the line against other countries & issues that may be detrimental to the US’s Interests

Im Ain Ani Li. The Torah says “If I am not for myself – who will be for me.” Trump has put the interests of the US before the interests of others. He provided the stimulus package from Corona. He held his ground with other nations. G-d rewards those that do good to His Chosen Nation. The USA has been in General a Nation of Kindness towards the Jews and other Nations. G-d will thus repay kindness with kindness by giving Trump more time to improve the Economy.

From the Beginning of the election much of the Democratic party & the media that supports them has been focused on seeing ways to criticize, condemn and complain against our President. G-d protects those who are pursued.

6. Trump Has done things to help the Jewish community at large – Orthodox Jews will Pray that Trump will Win

After the good that Trump has done for Israel and the Jewish community – the Orthodox Jews feel a debt of gratitude towards Trump. Take into account the Difficulties that ceratin Democrats have placed on Orthodox Jewish Groups – will motivate them further to pray for a Republican Leader. Rabbis Have Endorsed Trump because his values are more in line with Torah values than his opponent.

In the Previous election – Rabbi Matityahu Glazerson Showed through the Torah Codes that Trump would be the victor. Rav Meir Turnheim, a chassid who lives in Lod, Israel  uses a different method to inquire the verses of the Torah. He came to the same conclusion that Trump will win.

8. The Other Side’s Platform is More Based Upon Criticism of Trump than Solving Problems

G-d runs the world according to Nature. People see through the difference between criticism and constructive criticism. In all the 4 years instead of pursuing a path to present solutions to problems – like has Trump – they have been trying to bring him down. This in the end will serve towards their detriment. People see through a real interest in improving the situation and just the desire to try to bring the downfall of the opposition.

9. The Opposition’s Platform Wants to Make the Country Less Moral According to Torah Ideals

G-d Hates immorality. He wants people to follow his Torah laws. The opposition supports Abortion (on demand) without valid reasons, Homosexuality, etc. G-d wants morality according to His laws – the Torah – to be observed. The opposition is opposed to many laws of the Torah. G-d wants a country to be lead with a government that supports – law & order, respect of human life, respect of G-d, respect of property, respect of living creatures – as seen in the 7 Noahide laws of the Torah for all people. People feel safer when there is order than when anarchy reigns. This is one reason why it says “Pray for the peace of the Government – for if it was not – people would eat each other alive.”

10. Trump is a Businessman – not a Politician

Trump is running the country like a business. If something works he does it. If it doesn’t he nixes it. Thus his interest is more in line with running a business – the US – than listening to the opinions of the various groups that may have interests that are to the detriment of the US.

When Napoleon entered Russia – two rabbis had opposing vues of who they prayed to win the war. One Rabbi prayed that Napoleon should win – because he would make material life better for the Jewish people. The Other rabbi prayed that Russia win the war – because it would be better for the spirituality of the Jewish people. We pray that one who will lead the country next will do good for both the spirituality and material sustenance of the Jews and all people.