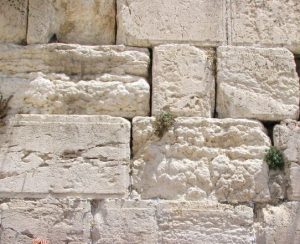 King David was of Ruddy complexion. In Torah this indicates a person that likes dealing with blood. Some implement their interest in becoming a butcher, or a Mohel (who circumcises children) or a Doctor or a Warrior.

King David was a Warrior. He killed Goliath and fought many wars. Though very righteous – G-d told him that he would not be the one to construct the house of G-d / Hash-m on earth – because he had spilled much blood. Thus it was His son – Shlomo  / King Solomon – the wisest man on earth who was given the charge of building the Beit HaMikdash / the Holy Temple in Jerusalem.

Since the House of G-d was to represent peace in the world – no metal was allowed to be used to hew (cut) the stones of the Temple. Metal is used for tools of war – and cannot be used to make this house of peace.

King Solomon had to find a way to cut stones without metal. He knew that there was a certain worm called the Shamir that was able to  cut through stone. (The story of how he obtained it is interesting in itself.)

Finally he sent his general to obtain the worm – and thus he was able to cut stones without metal.

Just recently – in a far away Philippine jungle river – researchers found a worm that eats rocks. This worm is called Lithoredo Abatanica. I literally burrows through stone.

Yet exciting and similar as it might sound, apparently it is not the Shamir. Comparing  the Shamir and the Lithoredo Abatanica, the details given in the Mishnah, Gemara & Midrash do not correspond completely. The most obvious differences include:

1) The Shamir is described as a unique supernatural organism created at twilight / bein hashmashot of the Friday of creation, and kept hidden, not an ordinary natural species of worm that eats rock instead of wood.

2) The Talmud indicates that the Shamir worm pierced and cut the stone by means of radiation that emanated from it and not in any other way. The Shamir didn’t just eat thru crumbly rock, it was said to have split solid metals & gemstones with its’ mere gaze/presence.

3) Our Sages tell us in Tractate Sota that the size of the The Shamir was as small as barley, and this worm is much larger.

4) The Mishnah at the end of Sotah says that after the second Beit Hamikdash was destroyed, the Shamir was no longer.

Regardless, it still gives us a sign to remmember the Temple times and further our hopes in the coming of Mashiach in our time. Amen.