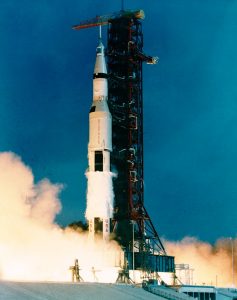 It was the fifth manned mission of NASA’s Apollo program. July 16, 1969 at 9:32 am EDT (13:32 UTC) at Kennedy Space Center in Merritt Island, Florida. The Saturn V rocket lifts off with Mission commander Neil Armstrong and pilot Buzz Aldrin. On July 20, 1969, at 20:18 UTC, Armstrong became the first to step onto the lunar surface. His famous words before taking a step down from the Eagle’s ladder -“That’s one small step for [a] man, one giant leap for mankind.”

G-d sends us messages every day. Apparently that message – heard throughout the world on TV – was a message to us humans. What was G-d communicating to us?

A message that is as relevant then as it is today.

Each one of us has a specific purpose to accomplish in the world. The winds of mediocrity tell us – eat, drink and be merry for tomorrow you die. But the attitude is a smoke-screen to mask us from achieving our potential. Like the background music that is played in stores – to keep you in a trance to keep you in the store longer – so that you don’t notice the time passing.

Take a person who imparts to a non-observant Jewish person the beauty of Shabbat by inviting them for a shabbat meal. That person thinks – ok so he had a meal by home – no big investment – I was going to prepare food for the family anyway. But it is possible that you changed the person’s life. Your small act of kindness was “one small step for man – but a giant leap for mankind.” Because you changed the life of that person. His life will not be the same for now you opened a door to help him or her develop a closer relationship with the creator of the world. He will now change his life because of a small act on your part.

Take a person who teaches another Jew Torah or a Gentile the 7 Noahide laws. We think “so he took five minutes to teach the other person a Torah lesson.” But in reality you may have saved that person’s life from the despondency of living a life void of spirituality and a relationship with the true creator of the universe – Hashem.

These are small examples. But the message is clear. One of our jobs in life is to do acts of kindness – that for us may be small – but make a great difference in other people’s lives.

Once a person fixed the collar of a person in a Yeshiva. He thought nothing of it. Many years later – the boy whose collar he fixed came up to him and thanked him. He said many years ago I felt lonely and was considering leaving the Yeshiva. But your act of kindness of fixing my collar made me reconsider – because I saw people did care about me. I wanted to say thank you.

Two women used to collect charity for poor people in the neighborhood. They decided together that the one who would eventually die first would come back to the other one in a dream and tell them about judgement in heaven. After many years one woman passed away. She came to the other in a dream. She told her – “Judgement in Heaven is rigorous, but the reward is also tremendous. Remember once we waved at a wealthy woman to get her attention – to collect some charity. You cannot imagine what great reward we were given for that small act.”

A small act of kindness goes a long way.