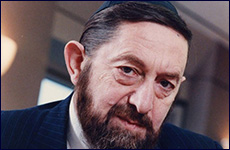 Moshe Reicmann related later in his life “I wish I was the one that went to wake up the students.”

The whole life of Moshe Reichmann – revealed where his heart was. He eagerly desired to support and learn Torah. Though he achieved tremendous financial success – he still remained a Ben Torah (Torah Learner) at heart. When he was in yeshiva – he didn’t think of going into business. He “wanted to something for the world.” When he did go into business he said often that the best training for business was learning Talmud (Gemara).

Once he went to the Gadol HaDor (One of the Greatest Rabbis in the Generation) Rav Shach. He asked him “I have enough wealth to support myself and my family and their families for the next generation – can I stop doing business to learn Torah all day?” Rav Schach said “You must continue doing business because – you are helping to hold up the world of Torah with your philanthropy.”

Yes. Holding up the Torah World. But not only the world of Torah, but the world at large – for great abundance and good is provided to the world from above due to the people who learn Torah. If Gentiles knew how much good comes from the people learning Torah – they would eagerly motivate us to learn it.

Thus he was a master builder – not only a builder of Sky Scrapers – but of Torah institutions and goodness in the world.

He helped to build Otzar HaTorah – a Jewish School system of many Torah schools in Morocco and France – for young children. He worked together with Rabbi Aharon Monsonego.

His relation in building schools with Rabbi Aharon Monsonego – chief Rabbi of Morocco – had it’s beginnings when they were both single. Once, when Reichmann was visiting a town in Morocco, Rabbi Monsonego invited Reichman to stay at his small room. He told him “I am sorry I have not much, but whatever I do we will share.”

For dinner he had a box of sardines and bread for himself. He gave half of the sardines and the bread to Moshe. He only had one bed, so Rabbi Monsonega gave it to Mr. Reichman to sleep in. Their relationship forged, together they toiled to build Otzar HaTorah school system.

Mr. Reichmann spoke used to speak dearly of the years that he spent studying Talmud and building Torah schools in Morocco. “I think that what I did in those years was a greater achievement than what I have done since,”

Mr. Reichmann gave millions of Dollars yearly to support and start new synagogues, schools, and Torah institutions. His humility, his impeccable honesty, Jewish philanthropy, eagerness to help Torah causes and his fellows will be missed by thousands.

Rav Schach – who was Rosh Yeshiva of Ponevehz Yeshiva – who was occupied studying and teaching Torah almost all day – in B’nai Brak – said to Moshe Reichmann – “I don’t know who has a greater share in Olam HaBa (the World to come.) But I do know that I have a greater share in Olam HaZeh (this world).” Because Rav Schach – had the great pleasure of learning Torah all day. Apparently Reichman agreed.