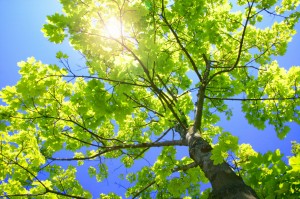 To find G-d you just have to search honestly and be logical. If you are searching truthfully you can take the example of Abraham, the forefather of Judaism to arrive at belief in G-d.

Abraham’s Search for G-d
Abraham — the one who “discovered” the true God was three years old when looking for Him. He reasoned that if the heavens and the earth exist, there must be a Creator.

In his age idolatry was rampant. How did he find G-d? His manner of determining who was the true G-d was to find a G-d without a weakness.

Rejecting gods
There is an important point here. When Abraham saw that a God that he thought was a true God had a weakness — he rejected it as the true God. Thus, anything that has a weakness must not be G-d. Thus G-d is not an object, not a star, not a planet, not an animal, not a man (dead or alive), not anything physical, not anything spiritual.

True God
Abraham finally discovered the true G-d – the G-d of the Jews – Hash-m – that eventually took Abraham’s descendants – the Jewish People – out of Egypt and gave them the Torah. The only time G-d appeared to an entire nation in all History.

Why G-d Does not Appear Today
G-d does not need to appear to people for people to know he exists. He appeared once in history to the entire Jewish nation – of millions of people – and gave them the Torah. No other people claim this fact. It is a fact just like George Washington was president of the US. Anyone who wants to believe in G-d can refer to that event. Just like a winner of a spelling bee doesn’t have to spell in front of anyone who asks them to prove that they won the spelling bee. They just have to show them the “Spelling Bee Winner” Certificate. In the Torah, G-d says he will never change his nation.

Laws to Follow
To receive a share in heaven, Gentiles have to follow the seven Noahide laws.
Jews have to believe in the 13 principles of the RAMBAM and observe the Torah commandments.

Seeing G-d in Life
G-d sends us messages each day. You meet someone. They ask you to come over for a Shabbat meal. Coincidence? To Come and Learn Torah? Happenstance? G-d sends his messages to us daily. We just have to be attuned to hear them.

G-d is Good
If we were to properly contemplate the good that we receive daily from G-d – we would not be able to thank one iota of all that he gives us, like: breath, life, existence, children, family, friends, money, activities, water, food, torah, spirituality, a chance to connect with him, a body, eyes, ears, health … you continue the list.

Prayer and Proof of G-d
Pray to the G-d of Abraham, Isaac and Jacob – the G-d of the Jews and all the universe – and He will answer you. This is also one “proof” of His existence. Since He is all powerful, you can ask Him for anything you need. He has no limits to provide it for you. Keep in mind that he wants only your good.